Organ Dysfunction – Organ failure causes mortality in sepsis. qSOFA and SOFA can be use to look for the possible organ failure. SOFA (6 criteria) is recommended to be use in ICU. qSOFA (only outside ICU) and SOFA score can be used outside ICU for organ failure detection in sepsis. qSOFA has high specificity, which is a parsinimous tool for SOFA. So if it is positive, it indicate there are possible sepsis related organs failure. However, it doesn’t not tell which organs are dysfunction. SOFA score can tell us exactly which organ is dysfunction and provide the mortality rate according to the scoring. SOFA score is a bit time consuming, so we recommend using modified SOFA (MSOFA) score. MSOFA already validate by Grissom et al 2010. It consists of 5 criteria and similar to SOFA but in simplified form. We had further modified it to suit our Malaysian setting.

Infection – source such as bacteria, viral (include dengue), fungus, parasite and prion. 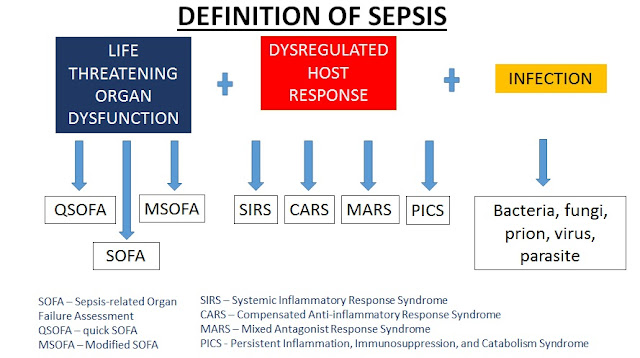 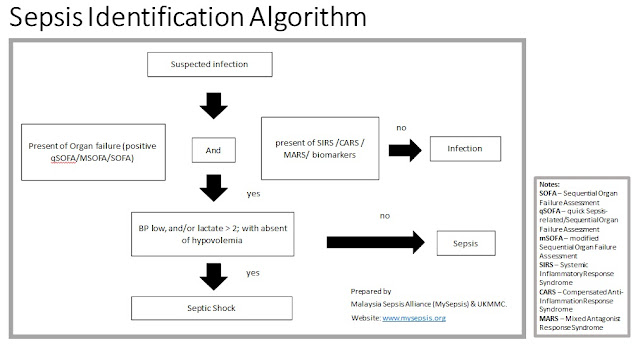 
The management of sepsis is challenging. Guideline had been form to facilitate this. MySepsis are supporting the recent updated Surviving Sepsis Campaign Guideline recommended by Society of Critical Medicine . We hope this will enhance the sepsis management in our local setting. #MySepsis 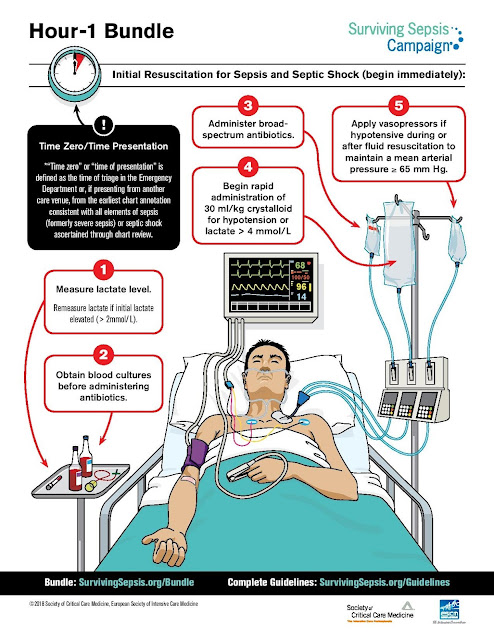 Please find the protocol at the following link

MARIK COCKTAIL - A "CURE" OF SEPSIS?

Vitamin C, Thiamin and Steriod improve organ failure rec
The components of Marik’s life-saving sepsis cocktail are simply steroids and vitamins, a therapy, which many have said is harmless, but may improve sepsis survival dramatically. Steroids for sepsis have been around decades, and although there have been several trials evaluating its benefits in the septic patient; it is safe to say that the use of steroids remains controversial. The recently completed HYPRESS trial did not demonstrate a benefit for steroids in patients with sepsis.  How about the use of vitamin C and thiamine? This is not a new concept and there are studies demonstrating benefit so perhaps, combining all these “harmless” therapies would work on the deranged physiologic pathways that are present in the septic patient.

So the conjecture here is that Marik’s new cocktail has little patient harm because the individual components are individually benign and have been studied before. In fact, Marik himself has made the claim that withholding this therapy while waiting for a multicenter trial to be completed would be unethical. In support of his statement he has even invoked the infamous “parachute analogy” where some therapies are so obvious that it would be illogical to test them in a clinical trial.

Abstract
Adapted from (Marik et al 2016)
Background: The global burden of sepsis is estimated as 15 to 19 million cases annually
with a mortality rate approaching 60% in low income countries.

Methods: In this retrospective before-after clinical study, we compared the outcome and
clinical course of consecutive septic patients treated with intravenous vitamin C,
hydrocortisone and thiamine during a 7-month period (treatment group) compared to a
control group treated in our ICU during the preceding 7 months. The primary outcome was
hospital survival. A propensity score was generated to adjust the primary outcome.

Findings: There were 47 patients in both treatment and control groups with no significant
differences in baseline characteristics between the two groups. The hospital mortality was
8.5% (4 of 47) in the treatment group compared to 40.4% (19 of 47) in the control group (p
< 0.001). The propensity adjusted odds of mortality in the patients treated with the vitamin
C protocol was 0.13 (95% CI 0.04-0.48, p=002). The SOFA score decreased in all patients in
the treatment group with none developing progressive organ failure. Vasopressors were
weaned off all patients in the treatment group, a mean of 18.3 ± 9.8 hours after starting
treatment with vitamin C protocol. The mean duration of vasopressor use was 54.9 ± 28.4
hours in the control group (p<0.001).

Conclusion: Our results suggest that the early use of intravenous vitamin C, together with
corticosteroids and thiamine may prove to be effective in preventing progressive organ
dysfunction including acute kidney injury and reducing the mortality of patients with
severe sepsis and septic shock. Additional studies are required to confirm these
preliminary findings. 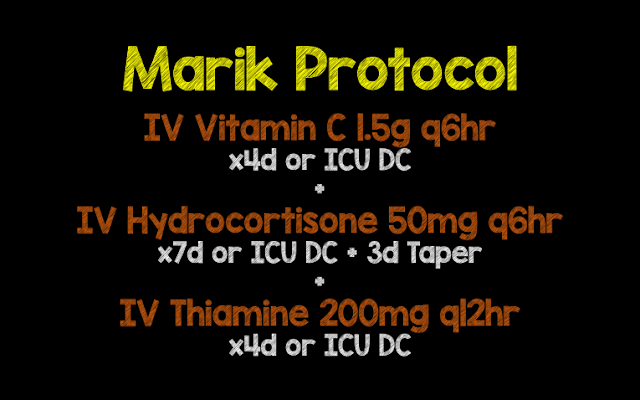 The clinical trial paper can be found at this link

For those who want to get a quick glance on this topic, please kindly go to this link (credits to R.E.B.E.L EM group making the topic easy to understand):

Malaysia Sepsis Research Group had found a potential solution for rapid bacterial detection with 2 to 3 drops of blood within 10min. It can be done via a trienzymes biosensor with a portable digital reader. We found that secretary phospholipase A2 group IIa (sPLA2-IIa)  have a very high sensitivity and specitivity (AUC=0.97, Sn=94%, Sp=94%)  in distinguishing bacterial infection from viral (Tan et al 2016, Tan et al 2018). We also pilot a second study involving 211 patient presented tovalidating the sPLA2-IIa against procalcitonin (PCT). The report was presented to the Annual Scientific Meeting in Emerging Infection And Treat 2017 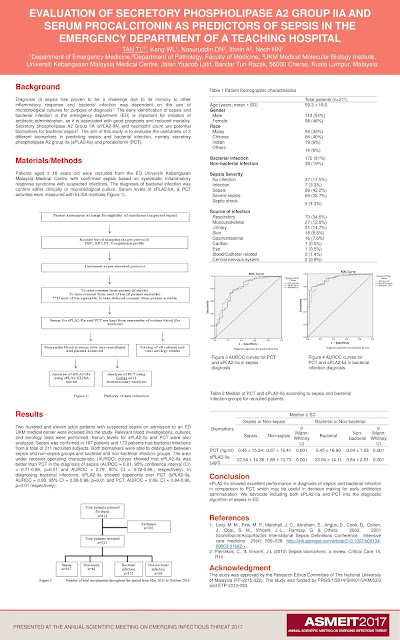 In a lower middle income country, we don't have a much resource to investigate sofisticate sepsis. We in need a very rapid diagnostic method to distinguish bacterial sepsis and initiate antibiotic as to compliance to 1 hours antibiotic SSC guideline.

Pay it forward: Sepsis no more.
A method to rapidly detect sepsis and a revolution the way how we approach sepsis. 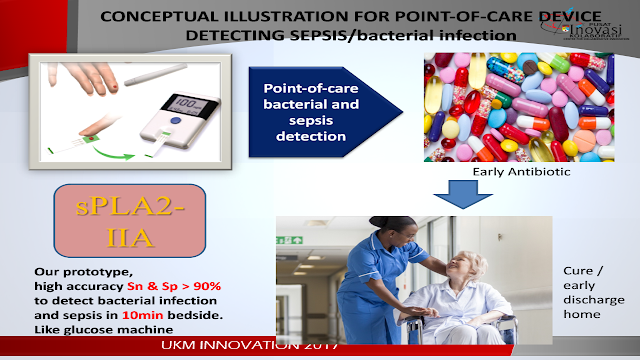 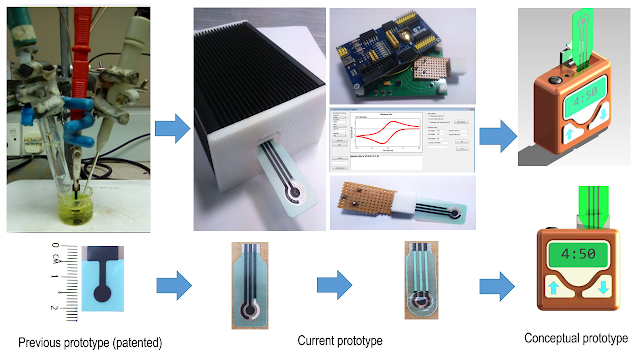 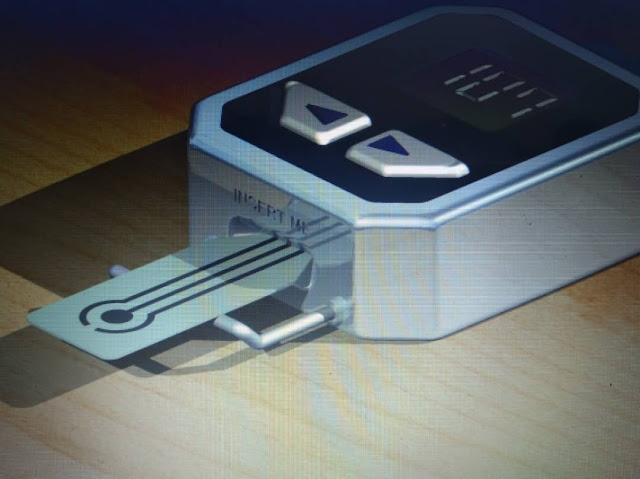 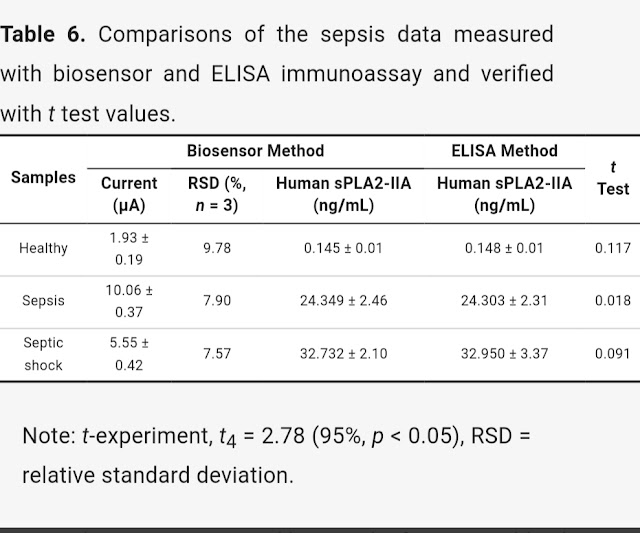 We had filed a patent on the invention. The publication (2018) on this POCT can be reach at below link

The bedsite point-of-care will be expected to come out as soon after complete a proper clinical trail.

We are welcome any enquiry. Any enquiry, please email to sigmarismalaysia@gmail.com

NEUTROPHIL DYSREGULATION DURING SEPSIS: AN OVERVIEW AND UPDATE

Sepsis remains a leading cause of death worldwide, despite advances in critical care, and understanding of the pathophysiology and treatment strategies. No specific therapy or drugs are available for sepsis. Neutrophils play a critical role in controlling infection under normal conditions, and it is suggested that their migration and antimicrobial activity are impaired during sepsis which contribute to the dysregulation of immune responses. Recent studies further demonstrated that interruption or reversal of the impaired migration and antimicrobial function of neutrophils improves the outcome of sepsis in animal models. In this review, we provide an overview of the associated mediators and signal pathways involved which govern the survival, migration and antimicrobial function of neutrophils in sepsis, and discuss the potential of neutrophils as a target to specifically diagnose and/or predict the outcome of sepsis.

IMMUNE EFFECTS OF CORTICOSTEROIDS IN SEPSIS

In sepsis, there is sufficient evidence from animals and humans studies to support that glucocorticoids modulate innate immunity to promote the resolution of inflammation and organs failure.
Much less is known about the immune effects of mineralocorticoids though increasing evidence from laboratory investigations suggested that they might favorably impact the outcome from sepsis. So far, survival benefits in adults with septic shock have been shown only for the combination of hydrocortisone plus fludrocortisone and not from the administration of hydrocortisone
alone.

Sepsis is a spectrum of syndrome. It started from invasion of pathogen to our body. The pathogen can be vary eg. Bacteria, virus, fungal and parasite. SIRS (systemic inflammatory response syndrome is a homeostasis process (balance) between the Pro-inflammatory (cytokines/acute phase protein, eg. -reactive protein, interleukin 1β (IL-1β), interleukin 6 (IL-6) and tumor necrosis factor α (TNF-α)) and Anti-inflammatory process (soluble tumour necrosis factor receptor (sTNFR), interleukin-10 (IL-10), IL-1 receptor antagonist (IL-1Ra), transforming growth factor-β (TFGβ), apoptosis). When pathogen invade, it triggers the Pro-Inflammatory response and lead to SIRS. Pro-inflammatory cytokine destroys the pathogen and also destroy our own body tissue. This is later counter-balance by Anti-inflammatory, in which control the extension of our own tissue destruction. This process of Pro and Anti-inflammation occurs during first few days of infection. If our own body win the fight against pathogen, this process will subside and back to baseline. This process can be augment by antibiotic & NSAIDs (with cautious). This is our current practice.

Is SIRS good for patients?
Moderate SIRS is good but too much response may lead to catastrophic event in sepsis. High Pro-inflammatory titre may cause Distributive shock (or commonly seen in Leaking phase in dengue). Immuno-complex and cytokine cause increase in capillary permeability and dilation. This may be explained for dengue leaking phase, which happened usually in Day 3-day 5 of dengue illness.

What are the factors that affect the SIRS?
Factors can be divide into Host and Pathogen.
Host: Age, Gender, Race and innate immunology. Pathogen: Load and virulence
New England Journal recently review that Young, Male, Black and Strong/athlete have a strong/higher SIRS response. We will notice that dengue shock patient usually occur among the young strong male?

If sepsis patient lose the fight (after 5 days of battle with pathogen), the body start to exhaust and will go into the stage called CARS (Compensatory Anti-Inflammatory Response Syndrome). What happened in this stage? Basically it is a state where our body mitigate the fight by repairing the body tissue without fighting against the pathogen. The patient usually present with negative nitrogen balance (low protein), multiple organ failure (caused by eg. pathogen destroys the body tissue, the deposition of antibody-antigen complex, dissemination of septic foci) which we call it Severe sepsis. If the mitigation state failed, it will lead to septic shock and death followed. Bleeding phase in DENGUE fever occurred in this phase. The patient currently is Immunocompromised State and secondary infection will set in. Do you notice that the source of sepsis will be hard to detect in this state (usually text book will classify it as Pyrexia of Unknown Origin). All healthy human body somehow have some innate septic foci, eg herpes, CMV, toxoplasmosis, fungi and parasite. Those septic foci will flare up when patient in immunocompromised state which make the management of sepsis more complex. Broad complex antibiotic, antiviral should be initiated as early as possible. We need advance diagnostic test to assist us.   In CARS, sometime we do notice the patient’s vital signs maybe normal and give us a wrong impression that patient is “well”. This patient was found later “suddenly” collapsed (this happened especially to those medical patient lodger in ED). The aim of the management for patient in CARS is to restore them back to SIRS. We usually start septic bundle management to restore patient physiology and kick start the pro-inflammatory process to fight back. 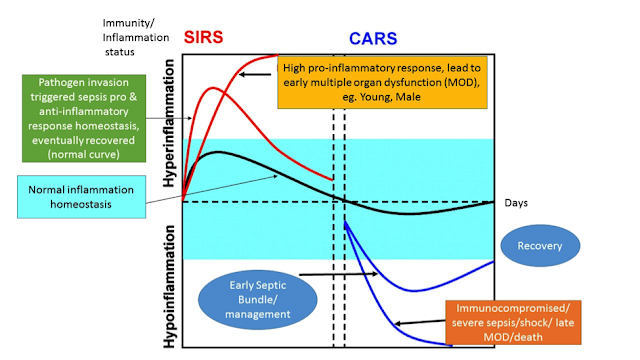 Why we need to RESTORE CARS to SIRS?
SIRS represent patient’s defence mechanism actively fighting against the pathogen. SIRS is a reflection of our body immunity/inflammation system activation. Without SIRS, human may not survive. Recurrent fever and moderate transient tachycardia is good news for sepsis.

How?
Actually we have already do this every day without noticing them. We start antibiotic to kill the pathogen. We give fluids to restore dehydration (not for the BP). We start inotropes to restore HR and BP. We give low dose steroid to restore the fight and flight hormones.

CONCLUSION
All suggested sepsis management protocols may play a role in different stage of sepsis. if we use it appropriately according to patient sepsis state (SIRS or CARS phase), the patient will benefit and recover. Early differentiation of sepsis from non-sepsis is crucial. Early antibiotic is the goal to be first achieve. Fluid is to rehydration, not for BP with the consideration to patient co-morbid, not by a fixed amount. Dengue is part of Sepsis and it can management according to above theory.